View the RESULTS of the weekly racing at SBR!!!

You'll find the best fafafa slot machine here, you have time to get it! September 28/29, 2018 – It was the coveted weekend every fan of South Buxton Raceway waits for year after year. The 2018 Joey Atkinson Canadian Fall Shootout was upon us, drivers and fans from near and far made the trek to say goodbye to the 2018 racing season.  Drivers from Michigan, Ohio and all over Ontario made the trip to South Buxton Raceway to give its fans two nights of back to back fantastic racing.

Friday nights Joey Atkinson’s Shootout features kicked off with the West Side Performance Plus Late Models. We had some new and returning drivers on the roster including:  Eric Spangler #27, Rusty Schlenk #CJ1, Brian Ruhlman #49, Andrew Reaume #88 and Rob Pietz #69.  Almost as soon as the Feature race started Schlenk, Reaume and Spangler were quick to take off from the pack in a battle all of their own.  The excitement had fans cheering as Schlenk and Reaume went four wide battling each other and avoiding lap traffic. “I needed lap traffic tonight, I don’t think without them I would have gotten Andrew” Schlenk said. It was a show unlike anything fans have seen at our track, watching drivers weave in and out of the lap traffic while fighting for the lead.  “It was crazy, I don’t know how close Andrew was to me, but I love racing with him” Schlenk said about maneuvering the 6 lap cars in front of them.  Schlenk brought home the feature win of the night making him the 2018 UMP National Champion.  Reaume, couldn’t quite catch the winner and finished second place.  Spangler, who was the fastest qualifier of the night brought home third place.

The Schinkels Gourmet Meats Modified race had six-time Shootout winner back in victory lane. Brian Ruhlman #49 was back at South Buxton Raceway and he was ready for another battle.  As soon as the checkered flag dropped Ruhlman was quick to overtake the field for the lead.  Hot on his tracks was Joel Dick #09D.  Ruhlman tried something new Saturday night and drove the top of the track “we’ve really never run up in that groove, It had good momentum, the car was really good.  We will try it again tomorrow” he said.  His quick decision paid off as he collected Friday nights feature win.  Dick and Brian Speelman #22s (this years point champion) fought nose to tail. Dick finished in second place and Speelman finished in third place.

Steve Shaw JR #96JR celebrated his Auto Tech Sales and Service Thunderstock feature win with a donut on the front stretch. Beginning the feature race in the 6th position Shaw Jr was quick to make it to the top three and battle alongside Steve Shaw Sr #96 and Dave Bailey #49.  Shaw Jr thanked his fans, sponsors and the track promotors.  Shaw Sr. finished the race in second place and Bailey finished in third place.

Saturdays Joey Atkinson Canadian Fall Shootout did not disappoint, the weather was fantastic, the track was slick and fans were ready for round two of this anticipated weekend. It was back to back West Side Performance Plus Late Model Feature wins for Rusty Schlenk #CJ1.  Tim Atkinson, track Founder Joey Atkinson’s son was on hand ready to hand out the coveted Memorial trophy.  Schlenk raced the top of the track for the majority of the feature race taking advantage of the racier part of the raceway.  “I loved every minute of it man, I wish I could come back all the time” Schlenk said in Victory Lane.  It was his first time at the raceway, but he showed fans why he was crowned the 2018 UMP National Champion.  Brian Ruhlman #49 maintained his second place position and battled hard with Andrew Reaume #88, Chris Ross #18R and CJ Field #4 to finish second.  Field climbed from his 6th starting position and battled hard with Ross for his third place finish.

The Schinkels Gourmet Meats Modified Feature had last year winner in Victory Lane once again. Andrew Hennessy #87, after climbing from 18th starting position to finishing 4th in Fridays feature was back with determination to bring home the trophy.  Starting 5th position Saturday night, Hennessy picked off car after car for his lead.  “We were right on the money tonight, I really love this racetrack, I wish I could get here more, this one is my favourite one” he said of the raceway. With almost a half a second lead on his opponents, the 2018 Brighton Speedway Champion was all smiles as he thanked his sponsors, crew and newly formed friends for all of their support.  It was a challenge Brian Ruhlman #49 was ready for.  After starting the feature in the 13th position Ruhlman made an impressive climb to finish the feature race second.  Clayton Smith #313 has been a top competitor all year, he climbed from his 6th starting position and finished the feature 3rd.

It was a second Great Canadian Oil Change Mini Mod feature win for Andrew Pfahler #7x Saturday night. Pfahler started the feature at the beginning of the pack and maintained his lead throughout the feature.  “It was fun, it was like skating out there. We will be back next year, stronger than ever” an excited Pfahler said surrounded by his family and pit crew.  Marshall Hereygers #31 who has dominated the Mini Mod’s all season finished the race in second place and Caleb O’Leary #28K finished the race third.

South Buxton Raceway would like to thank all of their fans, drivers and staff members for a fantastic 2018 season. Without you all, our Saturday night hangout would not happen.  We had the opportunity to interview Sherry and Garry Lemesurier regarding this past season – “We would like to thank everybody here at South Buxton, we’ve had a good 5 years.  We don’t know what’s going to happen at the end of this year, as the track might be sold.  We would just like to say thank you.  “

As more information becomes available regarding the possible sale of the Raceway we will report accordingly. 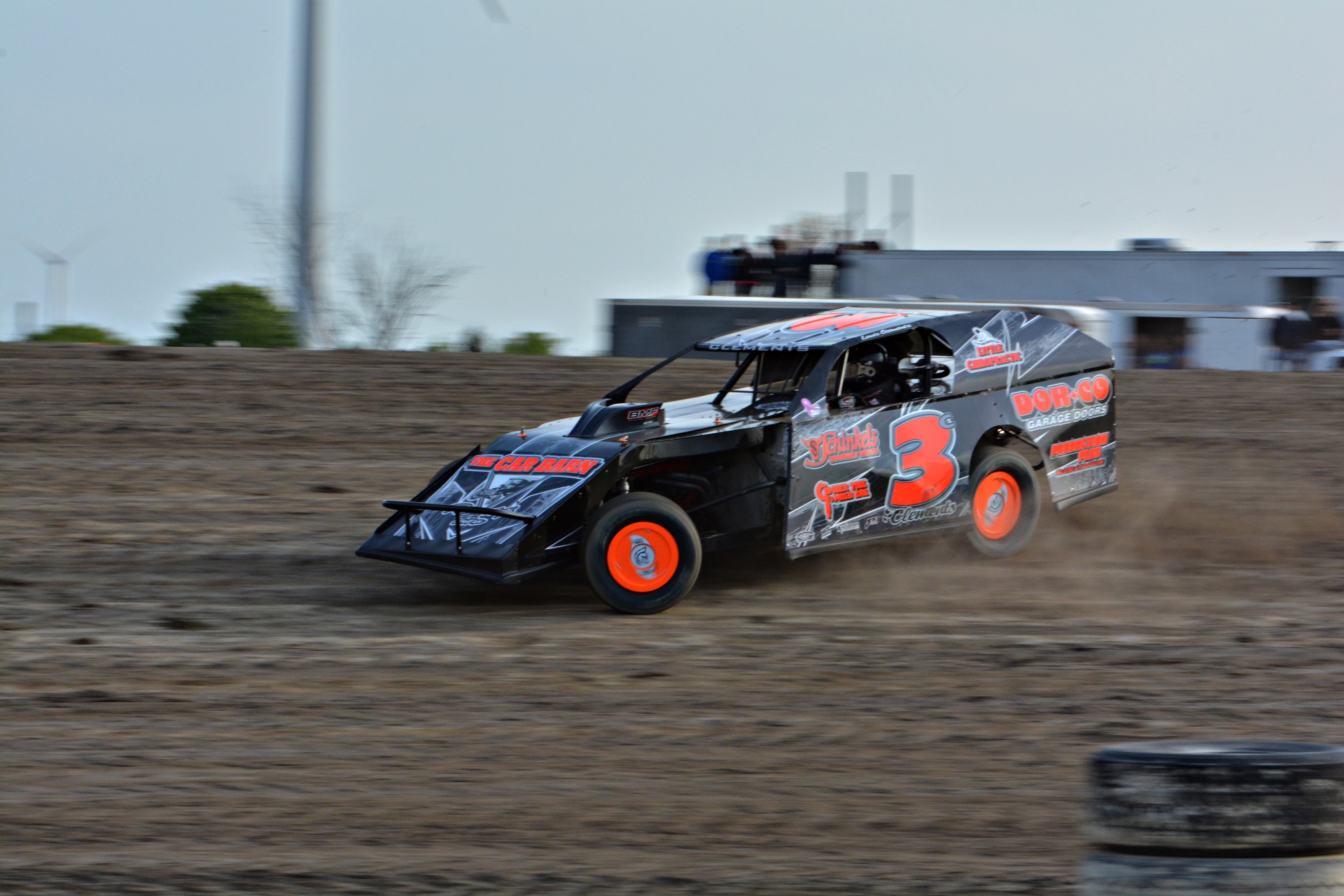 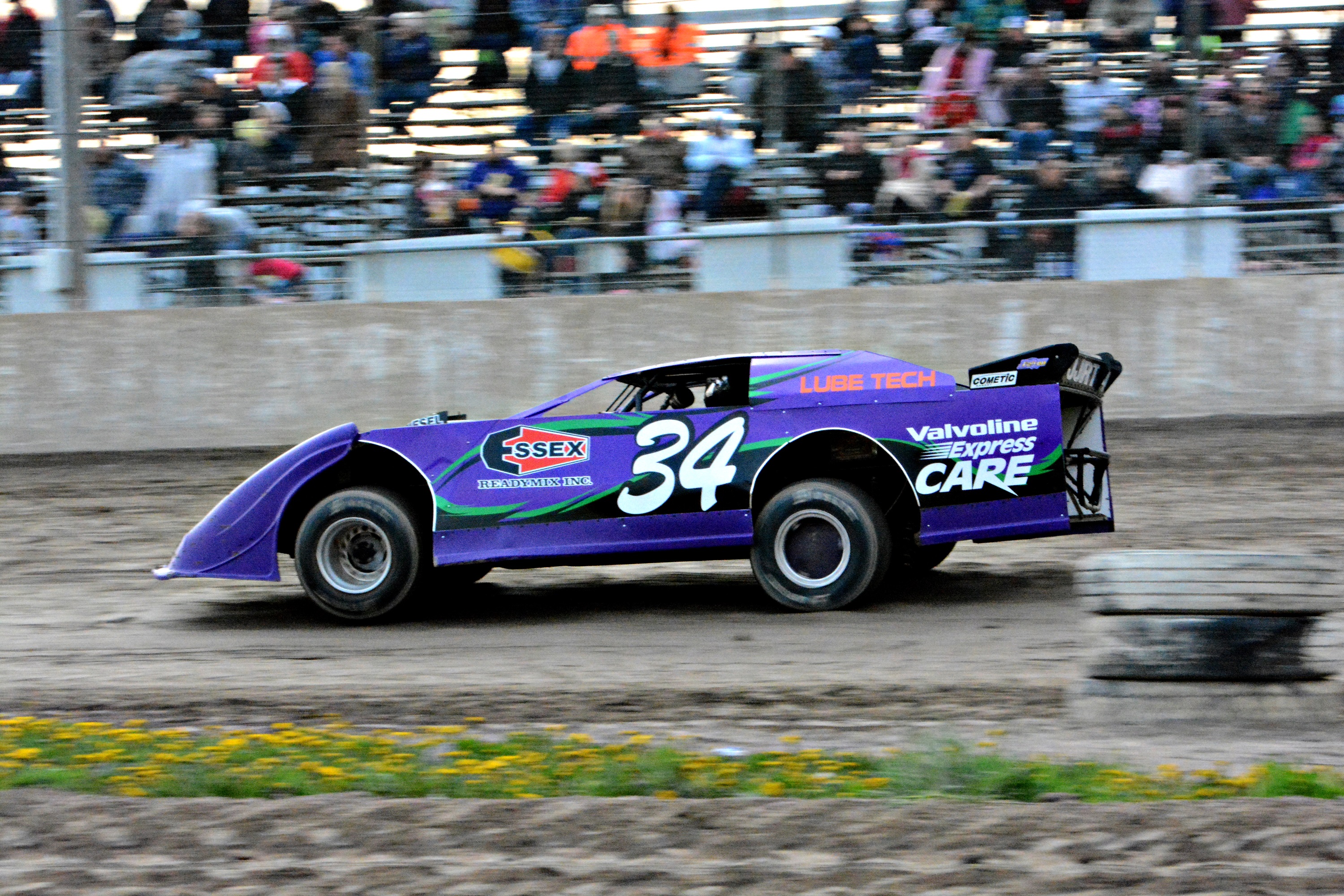 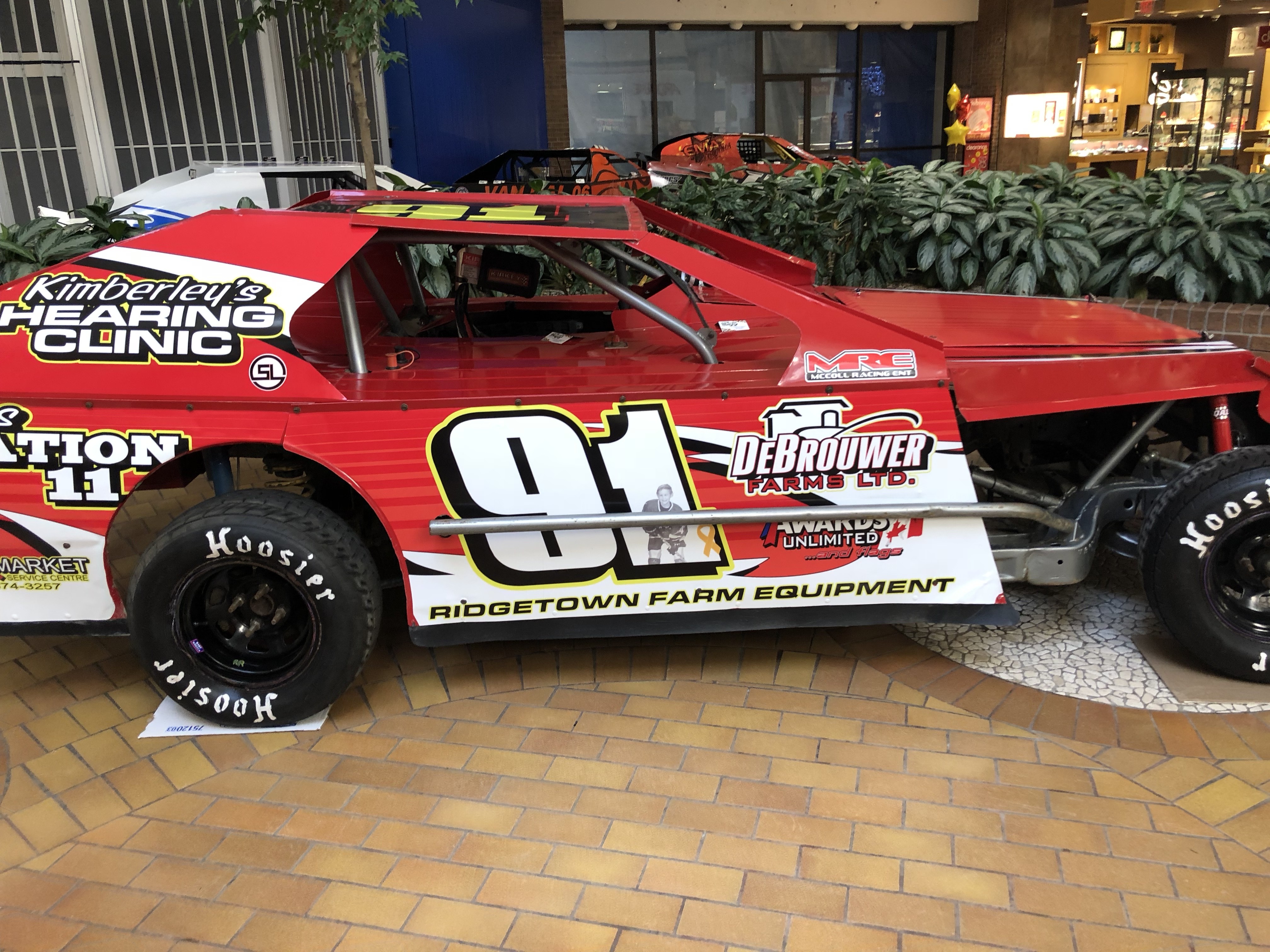 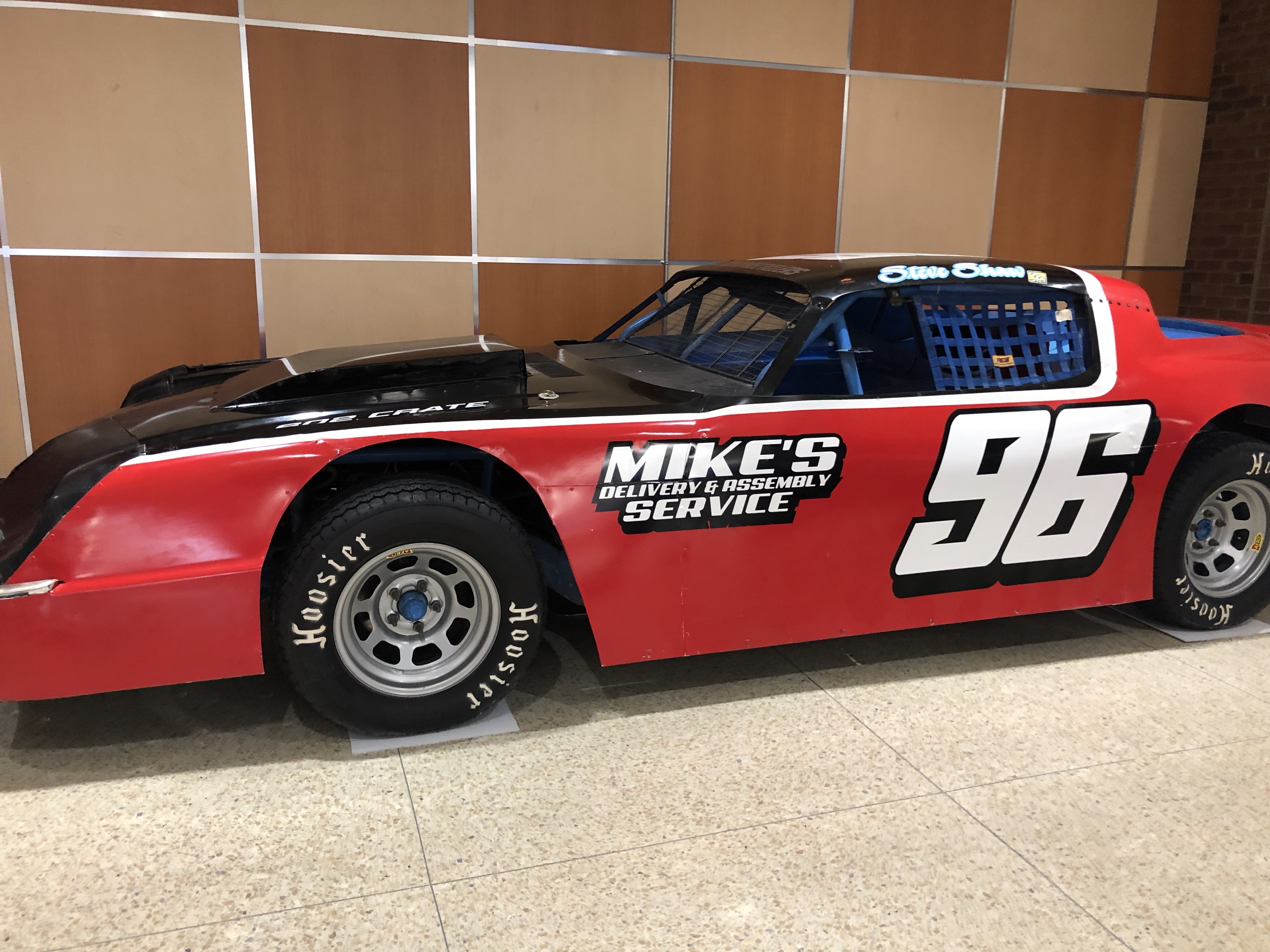 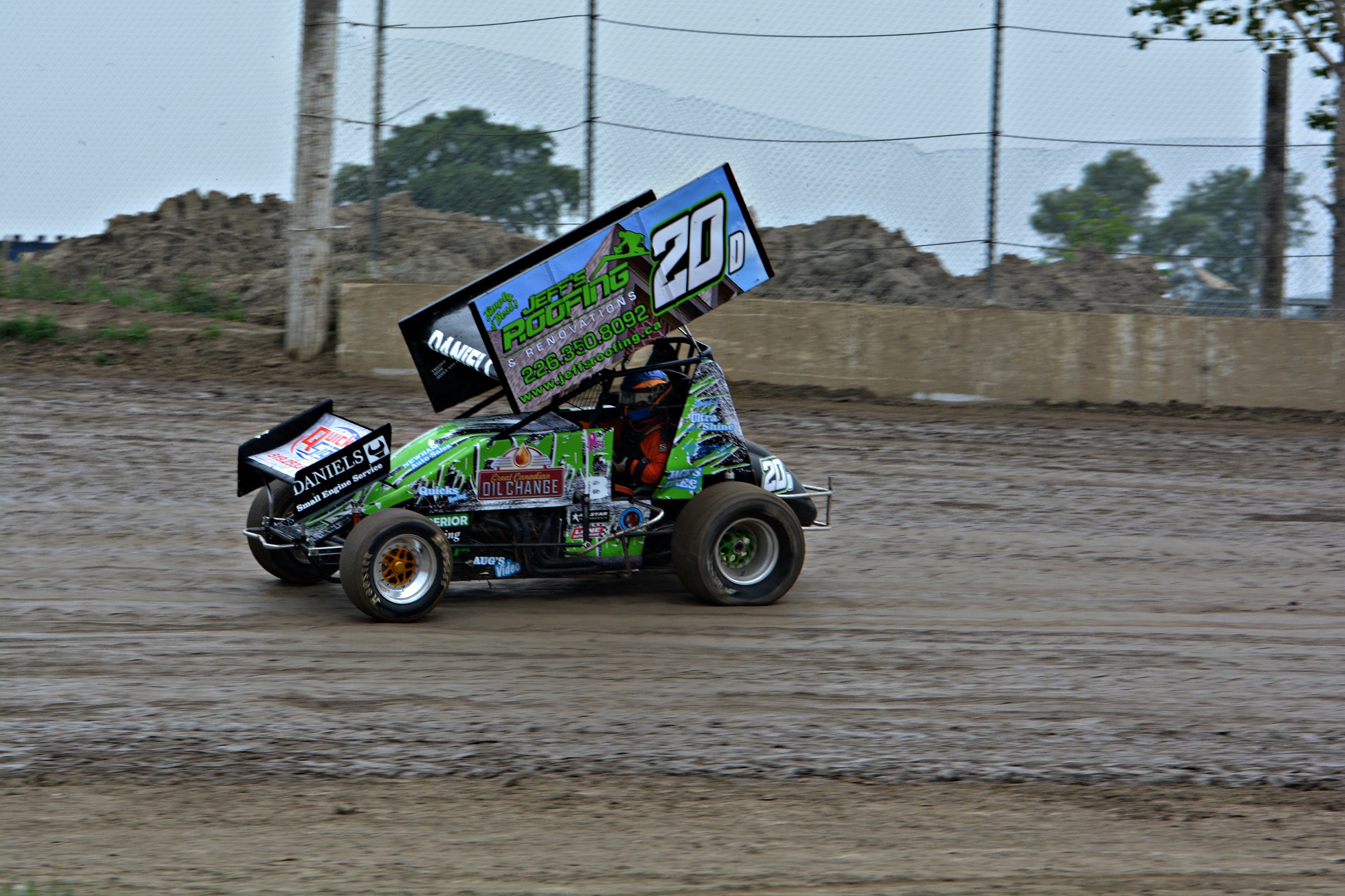 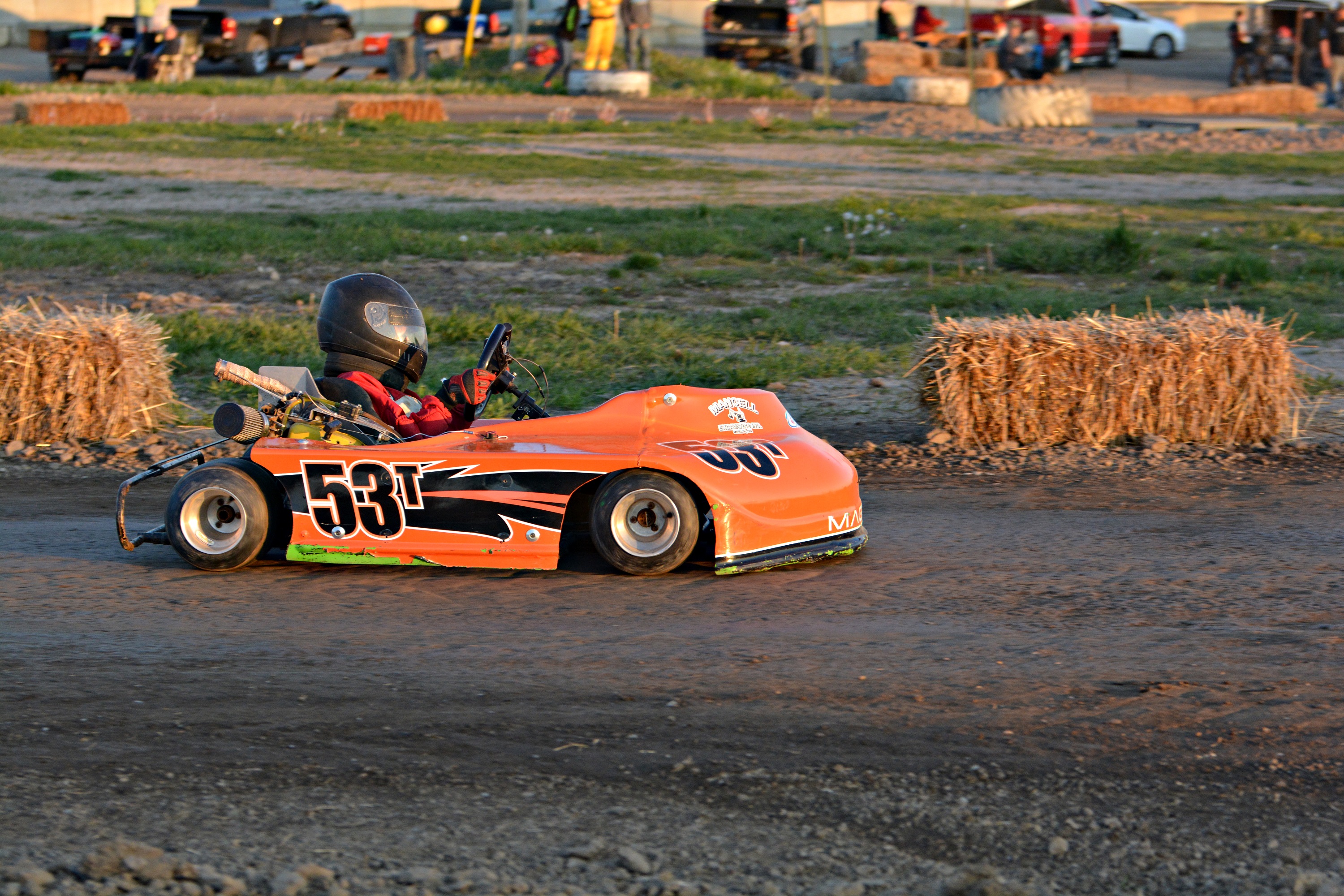